If you’re working with an InfoPath form and are trying to display it as a web enabled form but are getting errors saying the form template failed to load, it may just be due to the manifest for the XSN not containing the relative URL base.

For the following ULS errors:

These are due to the XSN not having the base URL defined, which can be resolved by updating the manifest.xml with the following element:
END_OF_DOCUMENT_TOKEN_TO_BE_REPLACED

The reason for this post is to hopefully help other users who may have come across the error generating solution files in temporary directory error when attempting to save a site as a template.

I came across the above error when enabling auditing against a custom content type and subsequently tried to save the site as a template. Looking through the entries in the ULS (unified logging service) log I found the following couple of errors:
END_OF_DOCUMENT_TOKEN_TO_BE_REPLACED

This post describes how you would go about creating a new SharePoint field and control the URL it maps to and have it display the ECB (Edit Control Block) menu for the selected item. 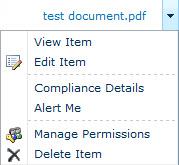 It may look like an ordinary field with an ECB but using a custom field we can control where clicking the URL takes the user.
END_OF_DOCUMENT_TOKEN_TO_BE_REPLACED