Just wanting to share the utilities, custom scripts and applications that I use when developing for SharePoint.

Besides the obvious, Visual Studio, SharePoint Designer and InfoPath, the following is what I find makes developing and debugging that little bit easier.

When using Visual Studio, I add a few custom menu items to the Tools menu, the following are my staples: 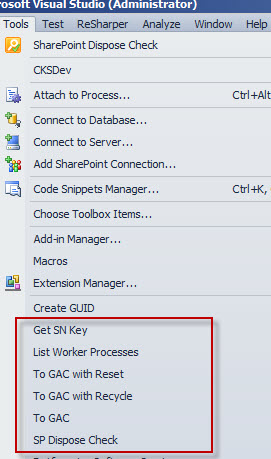 First up, there’s a menu item for displaying the strong name key for the current assembly.: 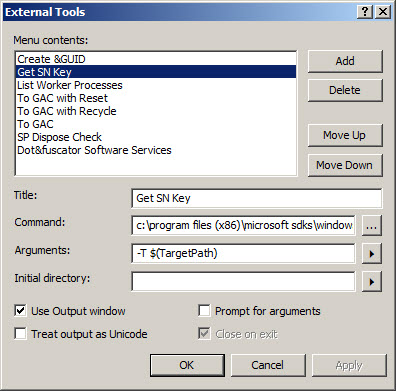 The command here references the %programfiles(x86)%\microsoft sdks\windows\v7.0a\Bin\sn.exe file and the following argument -T $(TargetPath). The -T option is used to display the public key token for the assembly given by the TargetPath variable.

Next, I add an option for listing all of the worker processes: 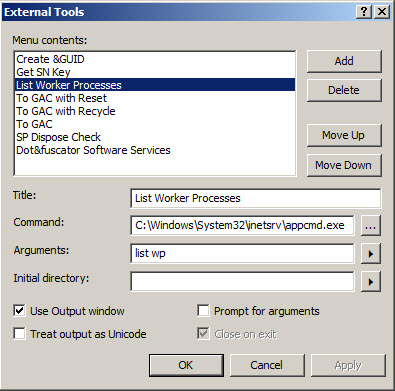 The command this time is C:\Windows\System32\inetsrv\appcmd.exe and the argument list wp.

Running provides an output similar to:

Which makes it easy to identify which w3wp process to connect to when debugging. Using add-ins such as CKSDev allow you to connect to the available IIS processes but not a specific one.

The next three options (To GAC…) all use a custom batch file which looks like: 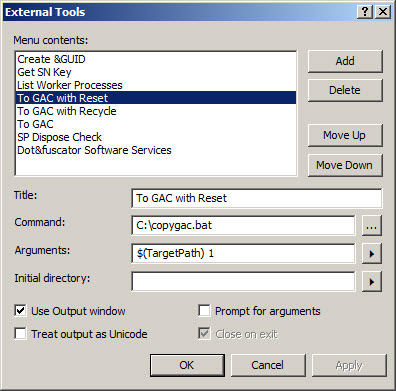 The argument for the To GAC with Reset option is $(TargetPath) 1. This copies the current assembly to the GAC and performs an IIS reset. Again, the CKSDev add-in provides this functionality but you need to copy it first and then reset IIS afterwards, this combines it into the one command. 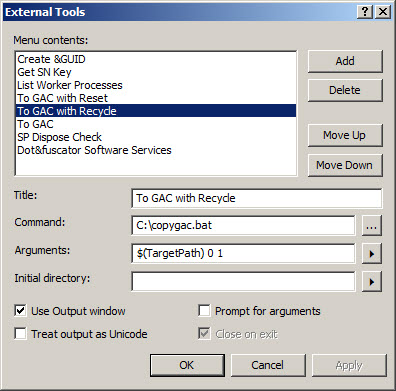 The argument for the To GAC with Recycle option is $(TargetPath) 0 1. As with the previous command, this also copies the current assembly to the GAC but this time recycles the SharePoint 80 application pool. 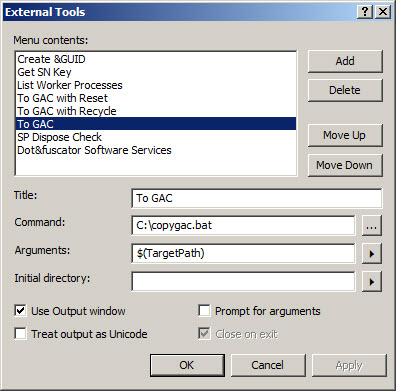 The argument for the To GAC with Recycle option is $(TargetPath). This command simply copies the current assembly to the GAC.

The last custom option I use is SP Dispose Check. 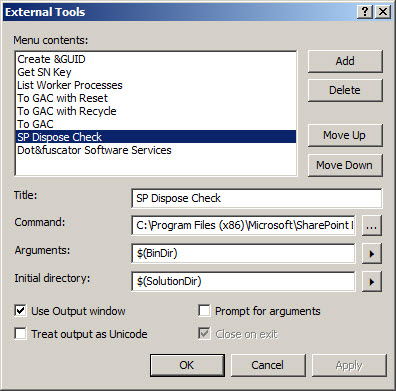 First, download the tool from the following site Dispose Check.

OK, that’s it for the Visual Studio tools. Next up, the custom scripts that I use.

Only the one script, if you exclude the copy to GAC batch file.

This script request the SharePoint timer job to process. Easier than going into the Central Administration site and manually running the timer job.

and the batch file to run the script:

Finally, I’ll list the applications and utilities that I use the most.

In no particular order:

This entry was posted in General and tagged Visual Studio. Bookmark the permalink.